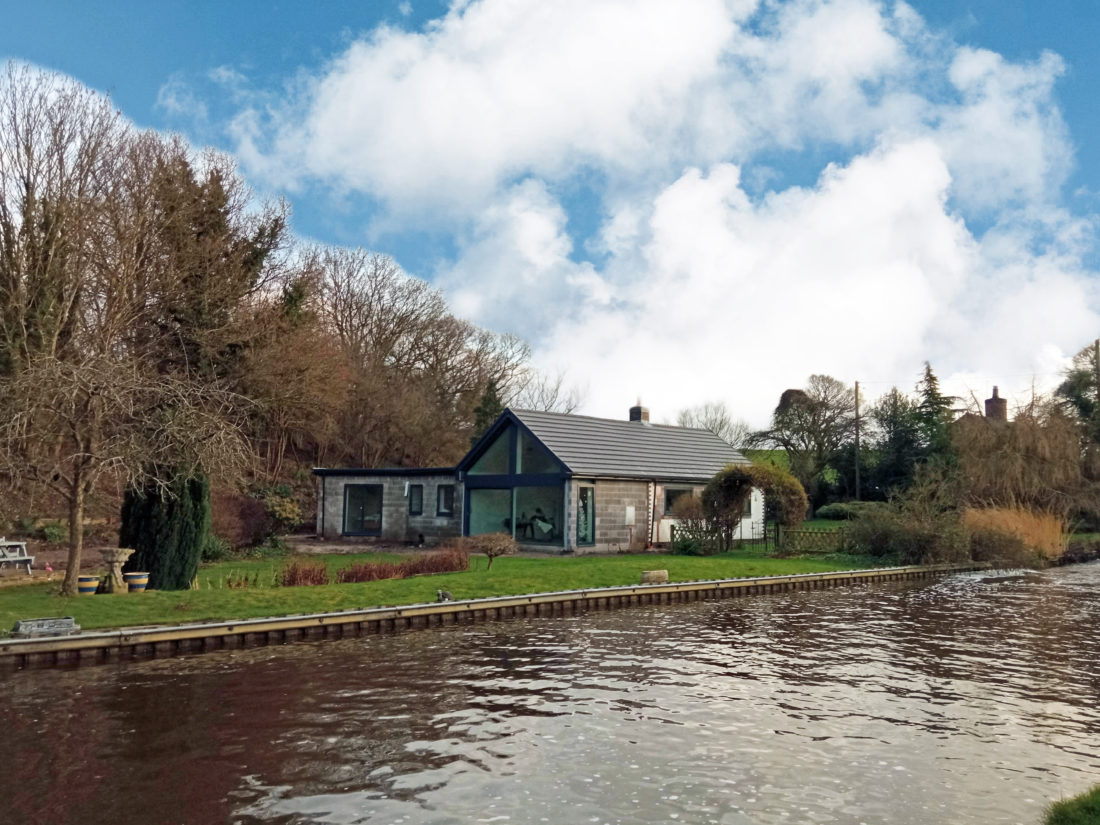 This beautiful bungalow is called Three Bridges, to reflect the three bridges that surround it – two canal bridges, and an old railway bridge. It is on the Llangollen branch of the Shropshire Union Canal, in Grindley Brook, Whitchurch, Shropshire.

When Rachel and her partner first saw their potential new home, they fell in love with the property and location, despite the significant work it needed. It was rather an odd property, looking like two 1970s bungalows separated by a flat roof. It was in really poor condition, with few redeeming features, and many people suggested that it should be demolished. “It would certainly have been cheaper!” Rachel admitted. The house was structurally sound, however, and Rachel felt an attachment to the existing property that could not be ignored.

Rachel moved in during March 2018. After two years of no heating, dodgy plumbing and leaky roofs, Rachel finally got planning permission to extend, retaining almost all of the existing bungalow, rather than adding another storey. The major work started in summer of 2020 and is now nearing completion. There is still has a lot to do. Rachel is now moving on to the outside space and landscaping as well as the decor, which will be in a contemporary style.

“It’s very different to what people might associate with a canal property, due to the lack of traditional period features and restrictions on planning,” Rachel explained. “The 70s clearly weren’t a strong time for asthetically pleasing house designs!”

Rachel and her partner have loved entertaining guests at their new home. “We have never been so popular!” she laughed. “People seem to relax the minute they come into the garden. There is something about canalside living that seems to be relaxing.”

Every room of Rachel’s house overlooks the Llangollen Canal, and the gable end of the kitchen dining room is fully glazed with large sliding doors out to the garden. While Rachel works from home, her ‘zoom’ calls for work have been made all the more interesting as people admire her background, or spot a narrowboat going past.

Rachel is really enjoying the pace of life on the canal, especially watching the wildlife. “We do have lots,” she said, “We have plenty of birds including a woodpecker and kingfisher who visit regularly, as well as ducks, rabbits and foxes.”

Rachel says that autumn and winter can be suprisingly quiet with little movement on the canal, and it is very peaceful. She is looking forward to another spring at Three Bridges. “It is a lovely time for the garden coming to life, and more narrowboats appearing.”

Summer is always busy at Three Bridges, especially with the staircase locks at Grindley Brook nearby. Rachel enjoys chatting with tourists who have hired boats, some from as far away as Australia, America and New Zealand. She says it’s always interesting to watch people cruising by, particularly as there is a bywash by the house, and the flow can send boats a little awry. It’s not been unusual to see people lose control of their boats, causing some frustrations, and occasionally leaving tempers a little frayed!

The house has been quiet recently, as unfortunately Covid19 has put paid to any entertaining, but there is plenty to look forward to. Rachel says that once the patio has been built, they anticipate spending most of summer out there. She doesn’t have any pets yet, but chickens are on her radar!

Of course, with the bungalow being on the offside edge of the canal, it is in a perfect location for a mooring. Rachel lost no time applying for end of garden status, and she was thrilled when this was granted. She has plans to buy a boat some time soon.

Rachel’s next project, however, is to set one of the bedrooms up as an Airbnb. It will have an ensuite, and direct patio access into the garden and onto the canal. What a beautiful place to stay!