Canalside Life at The Granary Shardlow 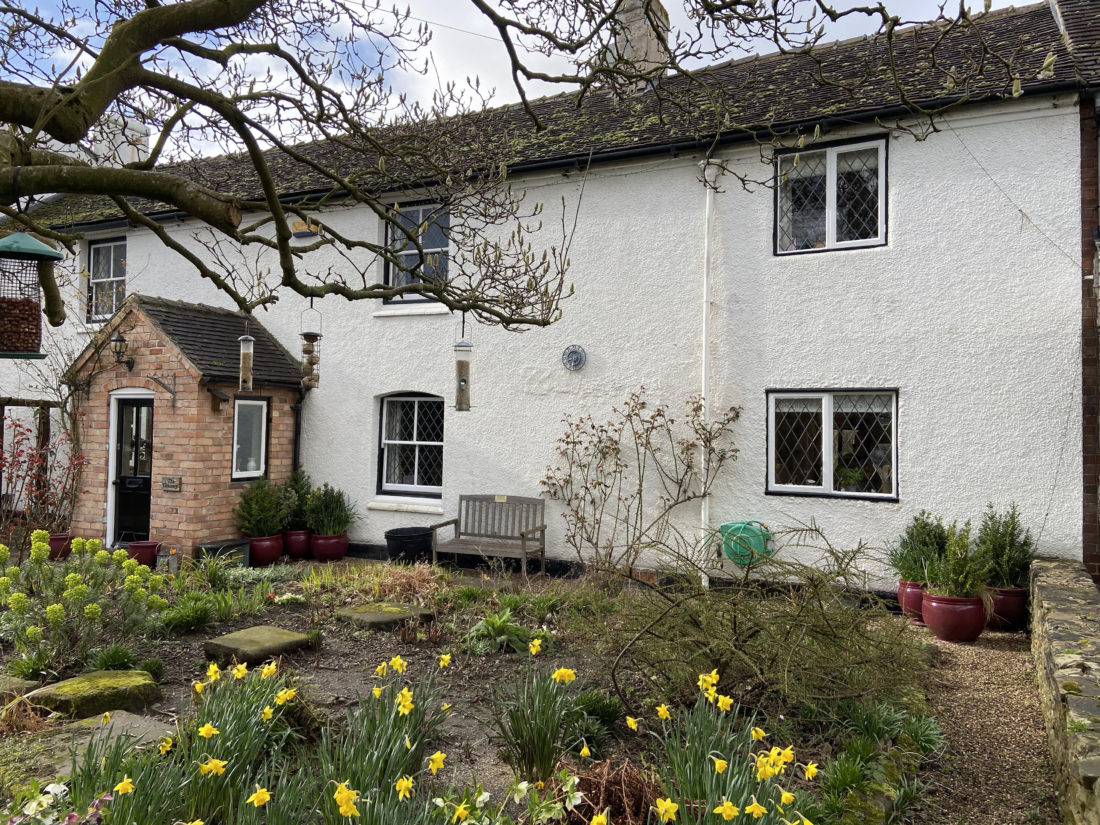 Sue lives at The Granary, a beautiful home in the heart of the conservation village of Shardlow, a historic Derbyshire inland waterways port, dating from the 18th century. The Granary backs onto the Trent and Mersey Canal, (formerly the Grand Trunk Canal), on a stretch of the waterway which was completed in 1770. Sue moved into the cottage in March 1991, so after 30 years in the same home, it’s clear just how much she enjoys all the special and truly unique benefits of canalside living.

Sue says it’s difficult to determine the age of the cottage, or whether it was originally built for warehousing or living. The nearby Merchant Houses are well documented, but the cottages are not. She guesses that it was built in about 1790. The cottage is on the towpath side. “The old Shardlow/Preston Brook 92 miles milepost is on the towpath right outside our garden wall,” says Sue proudly.

The cottage has been substantially renovated and a huge extension was built on the back in 2007 to accommodate another bedroom, an en-suite for the master bedroom, a utility room and to extend the living room. The cottage is set within the Conservation Area of South Derbyshire District Council, so Sue has to apply for planning permission for any work that needs to be done, even when she refurbished the sash windows on the front of the cottage recently. “They still need painting,” she admits.

Sue’s purple boat ‘Kwa Heri’ has been in the family since 1978 – 43 years. It is moored across the towpath in a local boatyard, but when she is rented to guests, Sue brings her over to the garden gate for guests to load up their belongings.

Although the area is susceptible to low lying flooding in the fields around the area, and the River Derwent and River Trent do regularly burst their banks surrounding the village, Sue says that so far the flood banks have managed to hold the water back. There is a pumping station on the flood bank that pumps water out of both the canal and surrounding ditches around the village when in flood conditions.

Sue’s home is a bit of a mixture between old and new. No effort has been spared with modern conveniences in the kitchen and bathroom, and the utility room is totally modern and functional. Everywhere else, however, Sue has decorated her home in a typical cottage style which sets off the lovely period features including exposed beams and a wood burning stove.

Sue is a Laura Ashley fan, and her decor reflects their former country chic style. “The rooms are colourful,” she says, “and maybe a bit busy.” Each room has a colour theme, the dining kitchen has dark walnut units, with one wall papered with birds and berries in a hedgerow theme, and the remaining walls painted in hedgerow green. Sue can sit in her kitchen and look out of the back windows for a glimpse of the canal. She says it’s even better when the purple boat is moored up on the towpath awaiting the arrival of her guests.

The living room has a mauve feature wall framing an old Jotul wood burning stove, with the remaining walls painted grey. The master bedroom is plain pale green with patterned curtains, whist the other four bedrooms each have a floral theme, including wisteria, hydrangea, and gladioli.

Sue is a keen gardener, in fact a couple of years ago she won the village prize of ‘Best Domestic garden as viewed from a public space’. She had a plaque made and popped it on the wooden bench in the front garden.

There are three sections of garden. The front garden faces Wilne Lane and looks out over farmers’ fields beyond. It has a cottage theme with the largest magnolia tree you have ever seen. The birds love this garden and Sue is a slave to filling up the bird feeders to keep them happy. The next section of garden is at the back of the house, with a lawn and a yard. This is where guests can park their car when they hire the purple boat.

The last section is Sue’s gorgeous back garden. It is directly behind the house and is mainly lawn with many borders and a tiny orchard. This area enjoys perfect privacy as it is tucked away behind a traditional high red brick wall, but you can see the canal through an archway, and step out through the wrought iron gate straight onto the newly refurbished Trent and Mersey towpath. One section here is just for roses, and Sue is currently trying to collect as many iris varieties as she can. There is a green house on a hard standing and a huge outside bar, which is well used over the summer months.

“We do enjoy entertaining,” says Sue, “and the outside bar is perfect for inviting friends round for a few beers and a takeaway curry. Many a birthday party, Halloween, and Bonfire party has been held in the bar and garden. Once a boat called Ebony moored up outside our house and we got chatting – the couple enjoyed a few beers and takeaway in the bar. It was spontaneous and such fun.” It sounds as if Sue has really missed the social aspects of canalside living during the Covid lockdowns.

Sue used to keep hens in the garden – at one point she had 15, but they had to go when their dog Katie arrived, because she kept chasing them – she just couldn’t help herself.

People on the towpath can’t see into the garden, except through the iron gate, but if Sue wants privacy she can close a tall wooden gate over the iron one. “It is fun to keep the wooden gate open,” she says, “because my dog loves to sit there and meet new people. I once saw a little girl standing at the gate looking in, delightedly. “Wow! I’ve found the secret garden,” she shouted to her mum.”

Sue runs ‘The Purple Boat’ business from home. She is always kept busy with new hirers setting off from the towpath outside the house, and getting the boat ready for the next group. She also spends a lot of time promoting the business on social media and the website. “I wouldn’t have a business without the canal!” she says.

Sue’s two daughters find canal side living lovely and peaceful. They enjoy chatting to people who pass by the iron gate in the garden and find it fun when friends walk past with their dogs, (who always try to get in the garden!) They enjoy the swans, ducks, moorhens and other wildlife, and feeding the ducks has always been fun. They also enjoy watching narrowboats gliding by.

Sue’s husband especially likes having the towpath behind the garden, particularly in the summer, as he can pop out of the gate with Katie the Lakeland Terrier, and walk in either direction as far as he likes. When it is very hot in summer Katie really enjoys a dip in the River Trent, which is about a mile up the towpath from the cottage.

There is a lot of wildlife to observe from the cottage windows, including foxes, hedgehogs, mice, ducks, swans, moorhens, all the garden birds, and even a kestrel. Sue feels that the seasons are an important aspect of canal life, and walking the towpath brings these seasonal changes into sharp focus. The vegetation continually changes, dying down in winter, freezing water in the canal, spring shoots and May flowers, cygnets and baby ducks – there is so much to look at.

And the people? “There are some very colourful characters living in Shardlow,” Sue smiles, “This is what builds a community.”

If you’d like to hear more from Sue, you can find her posting in the Aston/Shardlow/Weston Facebook group, and also on her own social media: 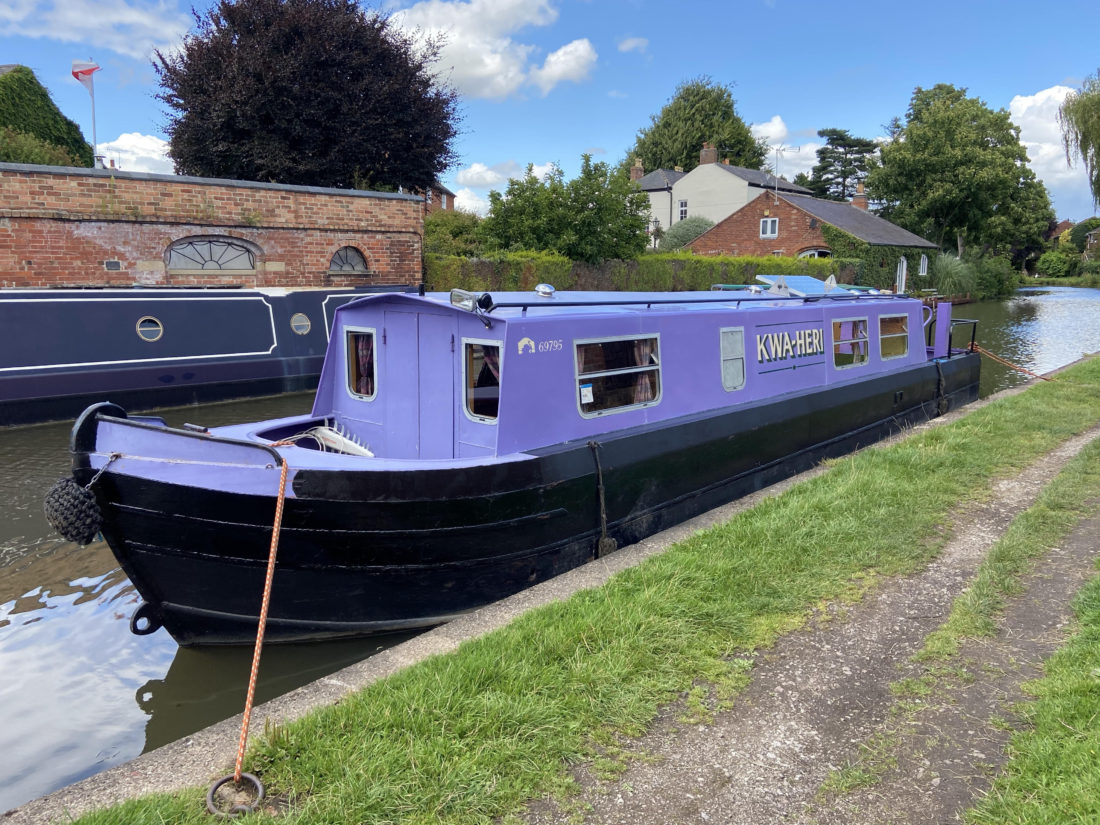 The Purple Boat moored up outside The Granary on towpath