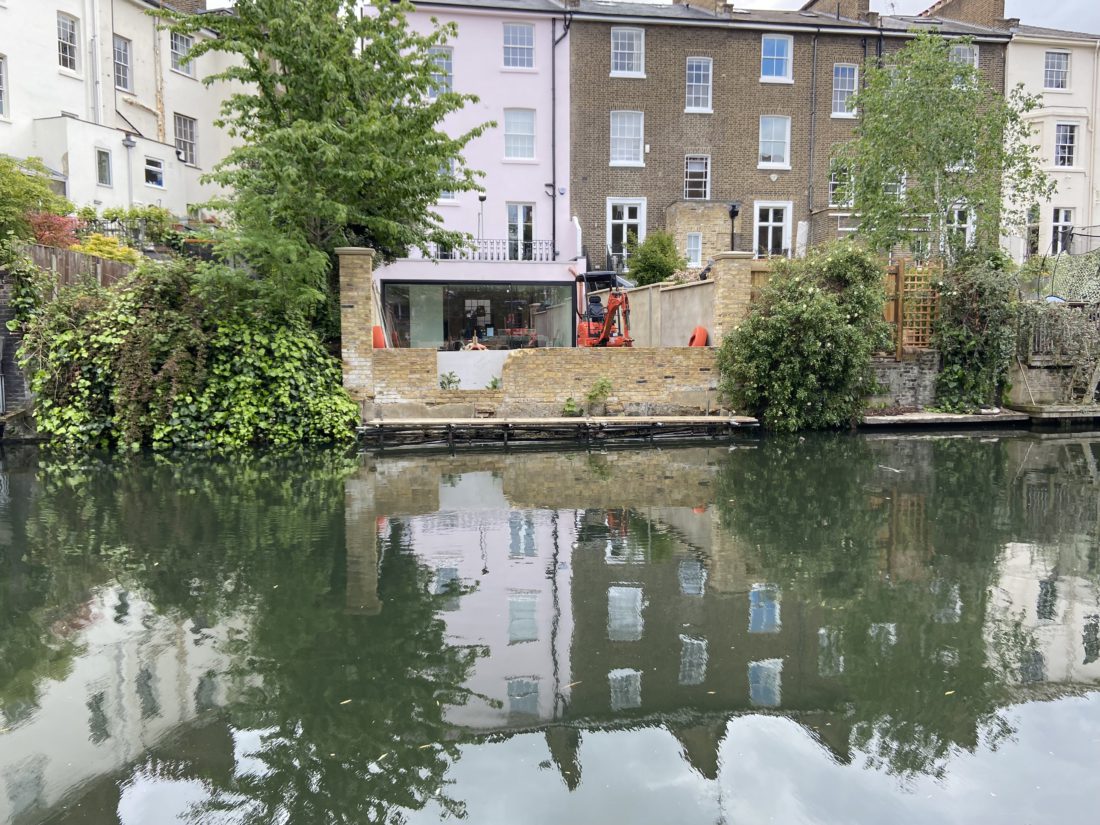 Renovations in progress at Primrose Hill

When I heard about Neil and Caro’s ambitious renovation, I was blown away by the scale of the project. Their home is an end of terrace Victorian property in St Mark’s Crescent, Primrose Hill. In this delightful Conservation Area, Primrose Hill, a Royal park, enjoys spectacular views across London from its grassy slopes, while a web of elegant cream-painted and golden brick terraces spreads out below. Neil and Caro’s house backs directly onto the offside edge of the Regent’s Canal, which is rather special to me, as it was the scene of my first ever canal cruise in 1972. It is clearly a special place for them too, and plays a major part in the tapestry of their lives.

“We have always enjoyed being by the water,” Neil enthused, “The canal is always an interesting place to be around, and having this in central London is a special opportunity.”

From the colourful basin of Little Venice, overlooked by the picturesque Rembrandt Gardens, the peaceful green corridor of the Regent’s Canal weaves between some of London’s most characterful streets and vibrant attractions. At its heart, the canal passes right through London Zoo. On one side you cruise past the gorilla circus, then, largely hidden from view, past meerkats, otters, lemurs, giraffes and zebras. On the other side, you pass the magnificent Grade 2 listed Snowdon Aviary (currently under redevelopment). Past the Zoo, the canal bears left and heads towards the cosmopolitain hubbub of Camden Market, gently sweeping past the back gardens of St Marks Crescent, with their stunning outlook over the canal.

Neil and his partner Caro moved into the house in August 2017. For such a prominent canalside home, it was surprisingly run down and had not been modernised since the 1960s. Thankfully the couple could see the property’s potential, and they boldly embarked on a five year long project to modernise their home.

From the outset they planned a sympathetic renovation which would be sensitive to the history of the building and its environs. Neil has investigated some of its history.

“The house was featured in a film depicting the London bombings of the 2nd World War,” said Neil, “A bomb damage photo shows that our neighbouring property took a direct hit.”

Most of the house has been sympathetically restored to its original design, retaining many of its original features, but Neil and Caro have taken a more liberal approach with the lower ground floor and basement. Creating these modern, contemporary spaces has required some extraordinary inventiveness on the part of the builders, who had to engage work boats to assist with the logistics.

“We excavated and built a basement that required all spoil and materials to be ferried to and from our house using barges along the canal,” explained Neil. “This was warmly received by the authorities, as it relieved construction traffic on the local roads, whilst using the canal in the way in which canals were designed to be used.”

Caroline works from home as a Landscape Architect and an award winning garden designer, so she has the opportunity to take in the activity along the canal and the towpath opposite. She enjoys watching the sightseeing boats that set off from Camden Lock, and the restaurant boats that set off from Paddington Basin. There are always interesting characters going about their business, with a steady stream of towpath walkers, runners, and sightseers, as well as paddleboarders, canoeists and even, on occasion, a few swimmers.

The house has been designed to entertain, and the garden beside the canal adds a further level of enjoyment. Being so exposed though, it can occasionally feel a bit like a stage upon which the family are the centre of attention. Neil suspects that Caro’s two grown up children sometimes feel slightly embarrassed by this, but not always. On one special occasion Caro’s daughter was celebrating her birthday in the garden, with a few friends and balloons. Suddenly a passing group of overseas students stopped and spontaneously sang happy birthday to her! The family’s three German Short Haired Pointers are also well known local stars, frequently capturing the attention of passers by.

Everyone loves the house, and the unique perspective it gives them on London life. Neil and Caro especially enjoy the connection to nature which the canal provides, despite being right in the heart of the city. In the summer they are bemused by the metamorphosis where the water is covered in duck weed over the two or three weeks and takes on the appearance of a green carpet. One of their regular joys is to see the moorhens nesting at the bottom of the garden. The little moorhen chicks are enchanting when they are newly hatched.

Now that the house is almost complete, Caro and Neil have turned their attention to the neglected garden. Under a tangled mass of overgrown bushes they found an old upturned blue dinghy, which upon further investigation turned out to have been manufactured in a small village in Blakeney, Norfolk.

The landscaping is currently under construction, incorporating paving, a lawn, specimen plants and trees. Neil has installed an interval time lapse camera that will show the project taking shape from start to finish. Eventually the garden will feature on Caro’s new garden design website, along with some of her other projects. I will be sure to link to the site here when it is live. In the meantime Caro can be contacted at caro@carocomber.com.

And what happened to the dinghy? Neil and Caro repatriated her to Blakeney where she underwent a simple restoration project and is now enjoying life back on the water again. The family are now the proud owners of an electric boat called Lollipop. She is moored on the jetty at the bottom of the garden, ready to take advantage of the fantastic city cruising right on their back doorstep. 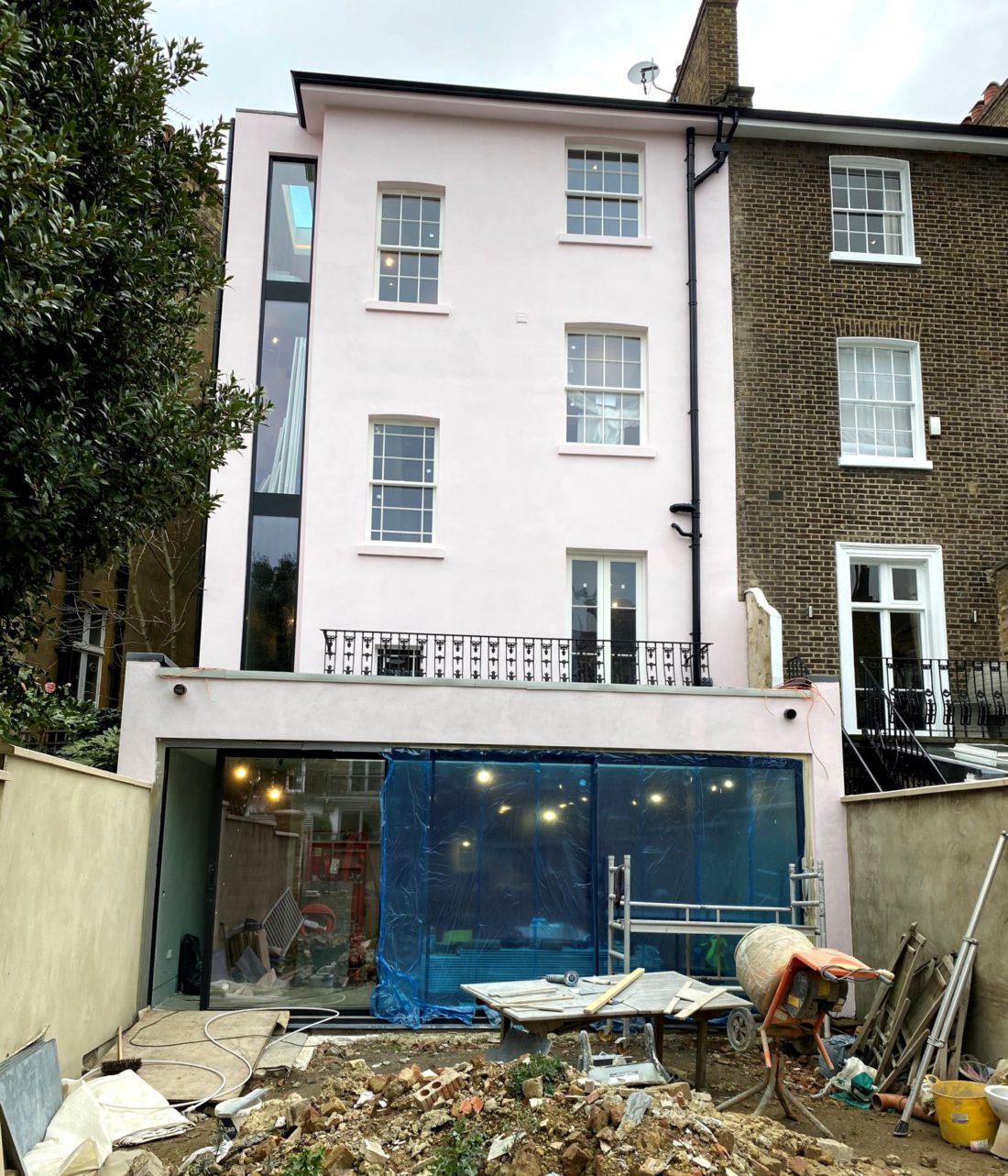