The History of The Elms, Benwick 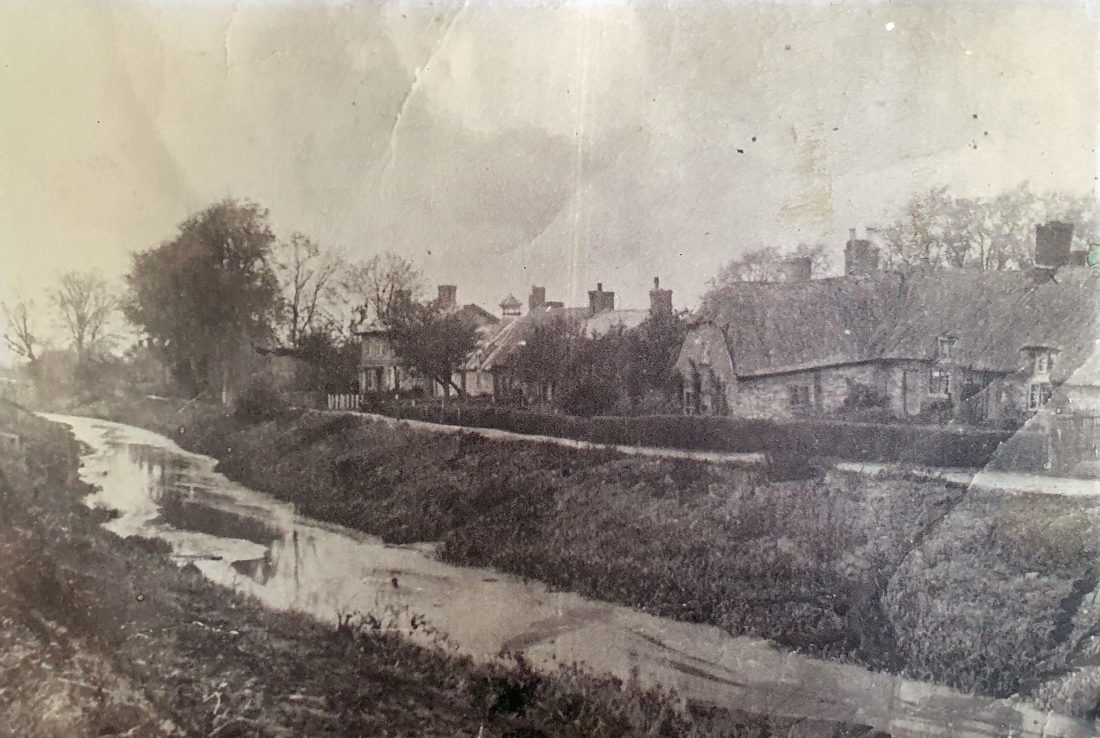 The Elms, photo provided by the present owner.

The Elms was probably built in the mid 1800s. I have worked with online resources to research its history. This is a work in progress, and a visit to the local archives and purchase of various GRO certificates would certainly fill in the gaps and answer many questions.

In the 1841 census The Elms cannot be identified at all. The addresses listed to the north of the River Nene are High Street, then Little London, (where Millview House is today), then White Fen. It is my suspicion that the properties in Nene Parade are listed as part of the High Street, but this is difficult to prove, as no properties are named. The farmers of note in the area of The Elms are William Shepperson, Thomas Searle, and Thomas Hughes.

Thomas Searle was born in about 1823, and was living with his sisters Ann and Elizabeth. It is my hunch that he built or at least inherited The Elms, as he was very young, but I have found no proof. It has also been difficult to research the Searle family, as it is a common name in the area with several branches which may or may not be related.

In the 1851 census it is again difficult to identify the house. The addresses listed to the north of the river are Church Street, White Fen, and Little London. There are four farmers listed in this census. The first farmer, and still the most likely to be at The Elms, was 28 year old Thomas Searle, who was a farmer of 267 acres living in Church Street. In 1851 Thomas Searle was living with his unmarried sisters Ann and Elizabeth. They had two servants, both 18 years old: Mary Hancock, a house servant, and Henry Burbage, a farm servant. His sisters were both annuitants, suggesting that their parents had both died. The next farmer was 67 year old Samuel Golden who farmed 700 acres and lived in Church Street with his wife, son and daughter, perhaps at Jessamine House (later called Jasmine House), next door to The Elms. William Shepperson and Luke Hughes were farmers at White Fen.

The Elms first appears as an identifiable property in the 1861 Census. The house is still not named, but it’s position is easier to establish, as the row of properties by the river are listed as Church Row. The residents of The Elms in 1861 at this time were John Searle and his family. John Searle was born in about 1812. He was about 12 years older than Thomas Searle, and I believe they may have been brothers. An interesting possibility is that John and Thomas were the children of Richard Searle of Glassmoor, Whittlesey. Richard was a farmer and an insolvent debtor who was imprisoned in Cambridge gaol, and all his farm lands sold in 1822. He was discharged in 1823 and the sale of his estates were finally wrapped up in 1824. This connection is validated to an extent by newspaper announcements in 1830 connecting Richard Searle of March Fen and John Hemmant of Whittlesey. Could Richard have built The Elms with his remaining assets? And could this have been the same Richard Searle who died suddenly in Haddenham in 1847, age 65?

Certainly by 1861 the family were settled at The Elms. John was now 50, Alice was 48, their daughter Alice was 19, and their son John was 9. John was farming 80 acres and employing 2 men. They had two resident servants: John Chandler, who was an indoor farm servant, and Elizabeth Marchant, who was a domestic servant. The family remained at The Elms for many years.

In the 1871 Census The Elms is listed as ‘Farm House, River Side’ John Searle was now 60, farming 126 acres and employing 2 men 10 women and one boy. Alice was now 55. All four of their children were with them including, John now age 19, who was listed as a farmer’s son. There were also two servants: John Bedding, an indoor farm servant, and Elizabeth Saunders, a domestic servant.

In the 1881 Census the property was listed as The Elms, Nene Parade, for the first time. John Searle was 70, farming 113 acres and employing 2 men and one boy. His wife Alice was 67, their son John was 30, farming 140 acres with three men employed, and they had a domestic servant, Eliza Chapman, age 20.

In 1882 there was an outbreak of Foot and Mouth at John’s farm, amongst 11 cattle which he had recently imported from Mr Blunt in Whittlesey.

John Searle died in 1883. An auction was held on the premises on 25th September 1883 to dispose of his stock and animals.

By 1891 there were new residents at The Elms. Unfortunately the house name is not recorded in this census, so there is some uncertainty here. In the 1891 census the listings in Nene Parade appear to go west from the rectory. Only two farmers were listed living in Nene Parade: the Moore family and Harry H Jones (employer) and his sister Louisa, who were at Jasmine House. There were also four farmers listed in White Fen: 48 year old Joseph W Shepperson; a 54 year old widow Mary Ann Jones; 44 year old John Welcher; and 58 year old Joseph Coaten. None of these were in named farmhouses.

The most likely family to be living in The Elms were the Moore family. I discovered a Jane Searle, a daughter of a Thomas Searle, who married a man named C Moore, so the Moore and Searle families may be connected – I have not yet pursued this line of enquiry.

Jarvis Moore was a widower age 57, a farmer, and was listed as an employer. With him were his 27 year old son William, and William’s wife Lizzie. The Moores had left The Elms by 1901. William Moore was listed as a miller and baker in Benwick High Street in 1911.

I strongly believe that the next residents at the Elms were Hezekiah Shepperson and his wife Emma nee Perry. As before, the census has not helped with house names. I have come to this conclusion thanks to a process of elimination, the position of the listing in two census returns, and the fact that the house had 7 bedrooms in 1911.

Hezekiah Shepperson was born in 1864. He and Emma had three children: Fred, born in 1869, Henry, known as Harry, born in 1871, and Caroline Louisa (known as Louisa) born in Dec 1878, who later married Jacob Fountain. Hezekiah was a labourer and horsekeeper for John Searle in 1882, when a newspaper article recorded the theft of his overcoat. In 1891 the family were living in one of the thatched cottages in Nene Parade, two doors from The Elms. By 1901 it appears that they were living at The Elms itself.

Hezekiah died early in 1911, but his widow Emma and son Harry were still living at The Elms when the 1911 census was taken. No house name is given, but the next house is Jasmine House, the home of Harry Herbert Jones, which appears to confirm that the seven room house is The Elms. Harry was listed as a farmer (a worker, not an employer). His mother died the following year, and it seems likely that Harry would have left The Elms at that time. Harry continued working as an agricultural labourer, and he never married.

We await the 1921 census to establish what happened next, but some time between 1911 and 1939 Arthur Davis Burton moved into The Elms. Arthur was a farmer’s third son. In 1911 he was living with his parents, William and Amy Burton, and his younger brothers Harry and Nelson, at Mere House, Ramsey. Arthur was 23 years old at that time and working as a farmer. His youngest brother Ernest Arthur Burton (1) was a bank clerk and was living in Whittlesea in 1911.

In 1939 the national Register was taken. Arthur and his family were living at The Elms. Arthur was a farmer and Special Constable. Alice was not at home when the register was taken. Their children Marjorie and Ernest were at home. Marjorie was a volunteer with the Women’s Voluntary Service, and Ernest was a farm manager. She later married John Duncan Boughton. Also living there were a cook/dairymaid, 43 year old Clara Bland, and a general servant, 18 year old Joan D I Kightly, who married Horace Taylor soon afterwards, in 1941.

By this time The Elms was the farmhouse for ‘Bank Farm’, but I have found no evidence to clarify when this name was first used and by whom. Unsurprisingly, many fenland farms are named ‘Bank Farm’, and my results in newspaper searches for ‘Bank Farm, Benwick’ almost invariably turned out to be Forty Foot Bank Farm, one mile to the south. Bank Farm Limited was founded on 8 June 1944, probably by Arthur Davis Burton. The limited company united a collection of farms which were probably all owned by Arthur and his brothers. The company is now based at White Fen Farm opposite The Elms. Bank Farm Limited has been growing mustard for Colmans since 1880. It is still in the hands of the Burton family.

By 1950 Arthur and Alice Burton had moved out of The Elms, and were living at 13 Benwick Road, Doddington with their former servant Clara Bland. Arthur died in 1962 at Askham House, Doddington.

Arthur’s son Ernest Arthur Burton (2) still lived at The Elms and remained there for the rest of his life. Ernest’s son, William Ernest Davis Burton was brought up there, and perhaps his grandchildren too. Ernest died in 2003, and The Elms was sold out of the Burton family in 2006 to the present owner. 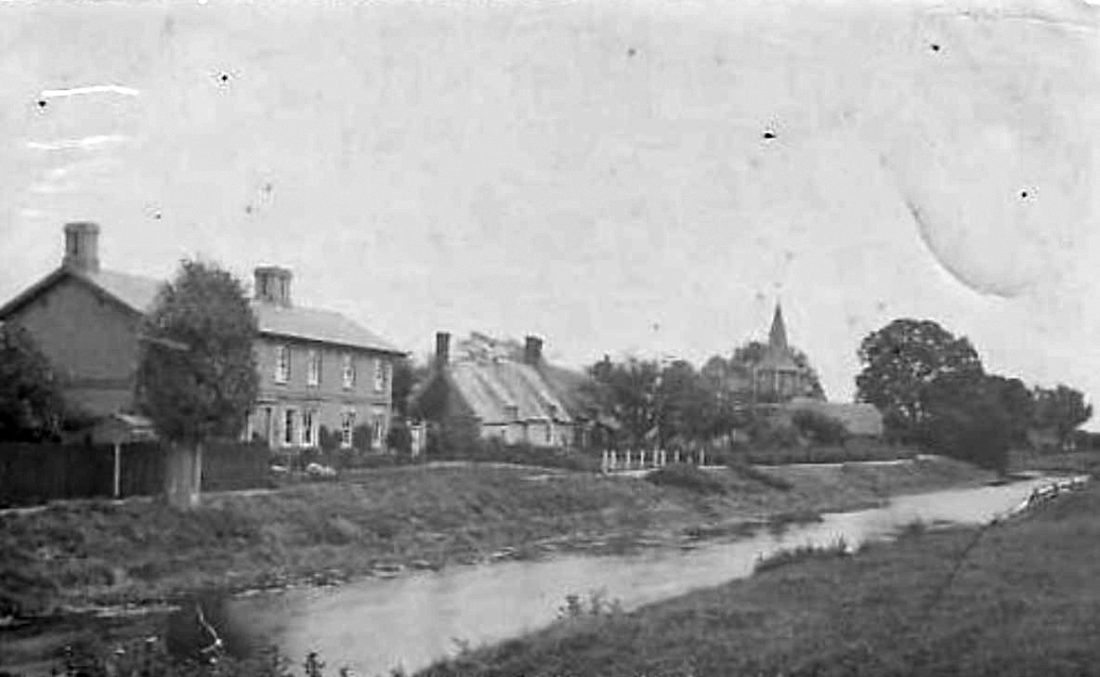 The Elms, photo via Flickr (permission sought but no reply received).

The Myth of the Sociable Estate Agent

How to sell a house in England

The History of Rothay Street, Leigh